Teach students to use cognates.

Some languages, like Spanish, have words that are similar in spelling and meaning to English words (computer / computadora). These words are often used frequently in content areas. Helping students learn to recognize these cognates gives them an additional resource for learning vocabulary words.

Using Cognates in ELL Classrooms
How cognates can help ELLs 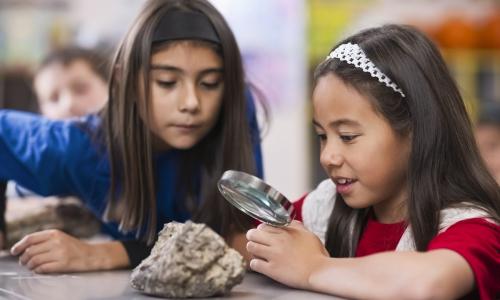 Cognates are words in two languages that share a similar meaning, spelling, and pronunciation. While English may share very few cognates with a language like Chinese, 30-40% of all words in English have a related word in Spanish. For Spanish-speaking ELLs, cognates are an obvious bridge to the English language.  This article includes a list of cognates as well as ideas for using them in the classroom.

Cognates are words in two languages that share a similar meaning, spelling, and pronunciation. While English may share very few cognates with a language like Chinese, 30-40% of all words in English have a related word in Spanish. For Spanish-speaking ELLs, cognates are an obvious bridge to the English language.

Not surprisingly, researchers who study first and second language acquisition have found that students benefit from cognate awareness. Cognate awareness is the ability to use cognates in a primary language as a tool for understanding a second language. Children can be taught to use cognates as early as preschool. As students move up the grade levels, they can be introduced to more sophisticated cognates, and to cognates that have multiple meanings in both languages, although some of those meanings may not overlap. One example of a cognate with multiple meanings is asistir, which means to assist (same meaning) but also to attend (different meaning).

When you read aloud to your students, ask the Spanish speakers to raise their hand when they think they hear a cognate. Stop reading and discuss that cognate. Point out the subtle differences you hear between the Spanish and English words. If you have a French, Italian, or Portuguese speaker in your class, invite them to contribute cognates in that language.

As ELLs read their texts, ask them to find three or four cognates and write them on sticky pads. Collect those notes and put them on an OUR COGNATES laminated chart. Before the class ends, read or have students read them to the class. Discuss spellings or sounds that are the same and different between the cognates.

Pair students and give each pair a set of cognate cards: one card has the English cognate and the other has the Spanish cognate. For example:

Have students sort the words. Then ask them what the word pairs have in common and write responses on the board.

Ask students to indicate which letters are different between the cognates by circling the letters. Alternate between having them call out differences with the teacher circling and occasionally having students come up and circle the differences themselves.

Write examples of false cognates on the board. For example: embarrassed/embarazada and pie/pie. Warn students that they might run into some words that are false cognates. These are words that look alike but do not have the same meaning in English and Spanish. Ask the students:

Does anyone know what pie means in Spanish (foot)? What does the word pie mean in English (dessert)?

Ask students to work with a partner to find as many cognates and false cognates as they can from a given list of words. After they finish, ask partners to share one example of each with the class.

Cognate words can cause problems for Spanish speakers learning English and vice versa because of different stress patterns in the two languages. Point out how the emphasis changes in the following words:

You are welcome to print copies or republish materials for non-commercial use as long as credit is given to Colorín Colorado and the author(s). For commercial use, please contact info@colorincolorado.org.

Add us to your home screen!

Tap and then tap "Add to Home Screen."